Sign up for The Ultimate Teen Challenge www.theultimateteenchallenge.com  Saturday May 23th 2015. Active Teens from around the country are invited to come out and participate in this fun and exciting challenge. Teen Men and Women can compete in our Individual Strength, Agility and Speed Competitions to WIN achievement awards and possible scholarships to help support their future endeavors and education. The events can range from a Bench Press and Inverted Pull-Up Competition, to a Tire Flip Relay, Cross-Fit Style Events, Weighed Sled Pull Competition and much more!

These thrilling fitness events have spectators, parents and coaches cheering on their favorite competitors who will be battling it out to see which teens are the strongest and most well-conditioned in the area.

The Ultimate Teen Challenge will be an incredible atmosphere, elevating the awareness and importance of fitness and athletic skills for all ages. The challenge will also have special guest appearances by Celebrity and Professional Athletes, along with unique contests and giveaways for all participating teens!

The Pittsburgh Fitness Expo is celebrating it’s 16  year anniversary in 2015! Come out and visit the region’s only expo dedicated to action sports, health, wellness, fitness and martial arts.  It’s non-stop action all weekend! 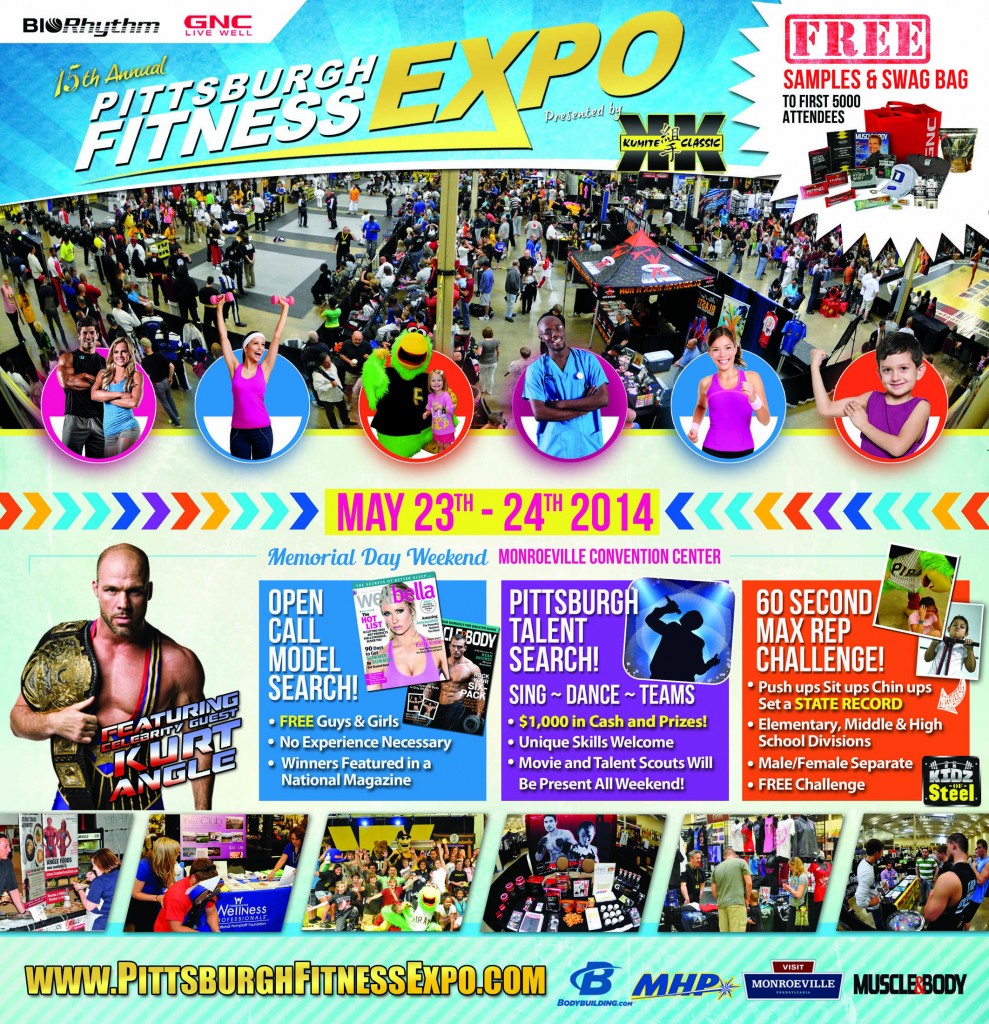 The Kumite Classic is Pittsburgh’s most established and largest fitness, sports, and martial arts expo.  The media has dubbed The Kumite Classic fitness expo as a “One stop shop for everything fitness.” The expo showcases the latest fitness products, exercise equipment, sports gear, clothing, nutritional supplements, health foods, and cutting edge cosmetic advancements.

The multifaceted expo is surrounded by “non-stop action” playing host to simultaneous championships, competitions, and demonstrations in one expansive area for spectators to enjoy. The audience is one of the most diverse (demographic & geographic) in the fitness industry attracting fans from over 15 different sports. The prestigious Kumite Classic brand is synonymous with athletic excellence.

*This race is now rescheduled for 2015.  Due to unforeseen circumstance with local government and road approvals, the race will be launched at the 16th Annual Kumite Classic Memorial Day Weekend next year. 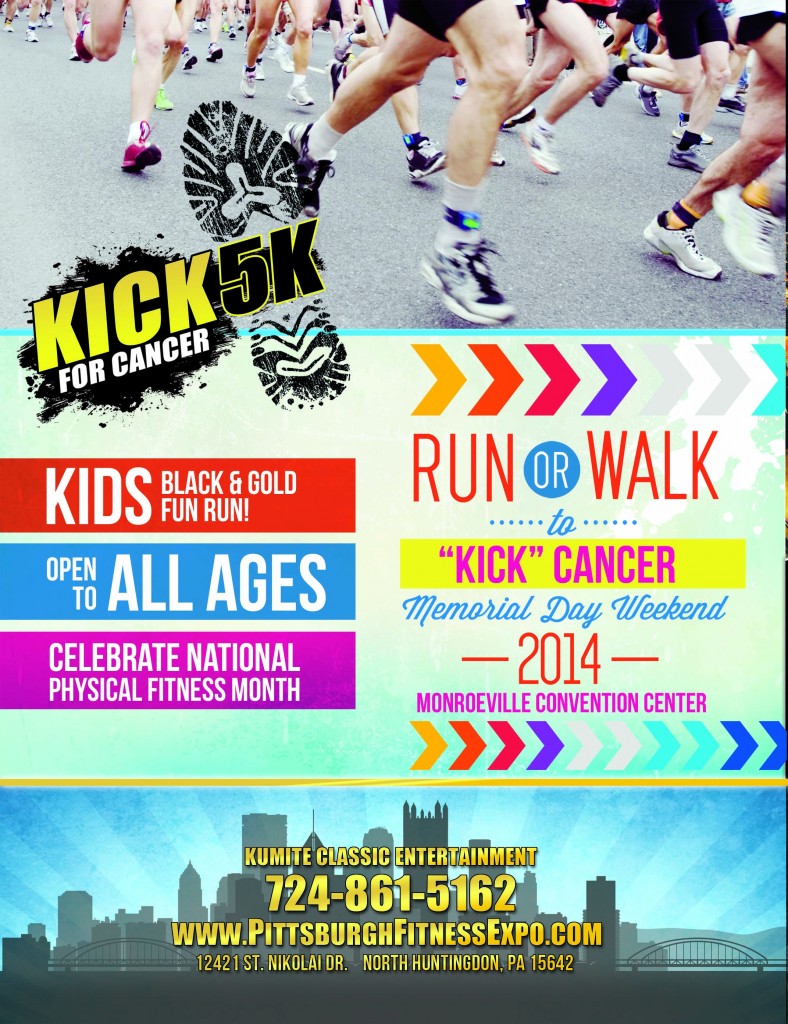 The 1st Annual Kick 5K walk/run in Monroeville. All participants in the 5K will receive free expo admission to the Pittsburgh Fitness Expo as a bonus!  www.kick5k.com

Galaxy Fitness offers something for the entire family; group fitness classes, the largest cardio center in Westmoreland County, selectorized equipment, free weights and HAMMERSTRENGTH plate loaded equipment. Galaxy Fitness also houses the Parisi Speed School for students and athletes ages 7 and up. In December of 2011, Galaxy Fitness became a CrossFit affiliate location with the addition of CrossFit Supernova. Their mission is to help our members reach and maintain their goals by providing safe and quality equipment in a clean facility where a warm atmosphere is supported by our friendly, educated and knowledgeable staff. Being the largest cardio center in Westmoreland County, they offer more that 25 group fitness classes a week, including, LES MILLS™ BODYATTACK™, BODYCOMBAT™, BODYPUMP™, CXWorx™, Zumba®, Step, Basic Body Conditioning and YogaFit. Find the perfect classes for you and discover the benefits of group fitness! If you prefer a more personalized fitness routine, they offer One on One Personal Training with our 3 experienced and knowledgeable personal trainers. All of our personal trainers on staff will help you work toward reaching your health and fitness goals.

Mr. Rivera has been a certified athletic trainer (ATC) since 1986 and a college professor since 1994. His professional experience included ten years of working with high school, college, and professional athletes before he became a college professor. His experience included serving as clinical athletic trainer for the Massachusetts Institute of Technology Athletic Department; the Puerto Rico Olympic Training Center and the P.R. National Wrestling, Tae Kwon Do and Baseball teams; the Puerto Rico professional baseball league; and the Center for Sports Medicine of the University of Pittsburgh Medical Center; and company therapist for the Pittsburgh Ballet Theater.

Mr. Rivera has been an active participant and has been appointed to a variety of professional organizations/committees. Among them are Advisory Committee for the City of Pittsburgh Marathon; site visitor for the Joint Review Committee on Educational Programs in Athletic Training; the NATA Board of Certification National Examination Development Committee and the Role Delineation Study Panel; and the Pennsylvania Athletic Trainers’ Society Ethics Committee. In addition, he has various published and unpublished papers/research and more than thirty professional presentations in local, regional, and national professional conferences (1990-2006).

Mr. Rivera is currently the IUP Athletic Training program curriculum coordinator and teaches courses in Human Structure and Function, Athletic Training (musculoskeletal pathophysiology, rehabilitation/therapeutic exercises, and clinical practicum courses), and Health and Wellness. In addition, he is a member of various departmental and university committees, including the IUP University Senate; advisor for approximately one-third of the students majoring in Athletic Training at IUP; and advisor for the IUP Martial Arts Club